Alaska is the largest state in the United States by area, the 4th least populous and the least densely populated of the 50 United States. Approximately half of Alaska's 735,132 residents live within the Anchorage metropolitan area.

Numerous indigenous peoples occupied Alaska for thousands of years before the arrival of European peoples to the area. Linguistic and DNA studies done here have provided evidence for the settlement of North America by way of the Bering land bridge.

The largest state of the United States, Alaska was admitted to the union as the 49th state in 1959, and lies at the extreme northwest of the North American continent. Acquired by the United States in 1867, the territory was dubbed “Seward’s Folly” after U.S. Secretary of State William Seward, who arranged to purchase the land from Russia. Critics of the purchase believed that the land had nothing to offer, but the discovery of gold in the 1890s created a stampede of prospectors and settlers.
© www.legendsofamerica.com 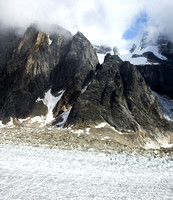