In 1776, the American colonies broke with its mother country of Britain and was recognized as the new nation of the United States of America following the Treaty of Paris in 1783. During the 19th and 20th centuries, 37 new states were added to the original 13 as the nation expanded across the continent and acquired a number of overseas possessions. The two most traumatic experiences in the nation's history were the Civil War (1861-65), in which a northern Union of states defeated a secessionist Confederacy of 11 southern slave states, and the Great Depression of the 1930s, an economic downturn during which about a quarter of the labor force lost its jobs.

From a geography perspective, the United States is extremely varied -- ranging from the Arctic to the subtropical, from the moist rain forest to the arid desert, from the rugged mountain peak to the flat prairie. Although the total population of the United States is large by world standards, its overall population density is relatively low; the country embraces some of the world’s largest urban concentrations as well as some of the most extensive areas that are almost devoid of habitation.
© www.legendsofamerica.com 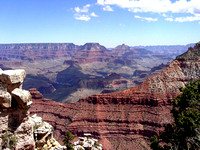