Since America began to be populated by Europeans, numerous buildings and important sites were established. In these early years, the colonists were more interested in survival and later, in forming their own nation, to be too involved in preserving historic buildings. However, many did survive including those in the Independence National Historical Park in Philadelphia, Pennsylvania, and in the earliest Spanish settlements of St. Augustine, Florida and Santa Fe, New Mexico. Spanish missions across the Southwest and California also still stand, as well as 17th-century buildings in New England.

But, over the years, a number of important and interesting sites have been lost, many due to the urbanization of cities and others to decay.

Our Vanished Sites Photo Gallery includes many historic landmarks that have been lost over the years, as well as other sites that were popular destinations for visitors and travelers in the last decades. These include many sites on old Route 66, as well as many other destinations that display former lodging facilities, diners, and roadside attractions
© www.legendsofamerica.com 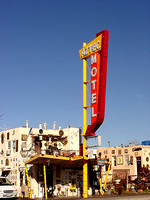 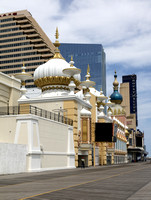