Arizona boasts the longest unbroken stretch of Historic Route 66 in existence. At the time of its official decommissioning in 1985, most of old Route 66 had already been replaced by I-40. The last stretch of Route 66, bypassed in 1984, went through Williams, Arizona. Though much of original Route 66 has been lost to other roads, farms, and ranches, this original stretch of the old road begins just five miles west of Ashfork, Arizona at Crookton Road (Exit 139 from I-40). The historic pavement stretches for 158 miles to the California border.

The stretch between the Crookston Exit and Kingman is approximately 92 miles, rolling through Seligman, Grand Canyon Caverns, Peach Springs, Truxton, Valentine, and Hackberry.

This old stretch of the road was saved, in part, thanks to Angel Delgadillo, a businessowner in Seligman, Arizona who has been dubbed the 'guardian angel' of U.S. Route 66. Just two years after the final stretch of Arizona's ribbon of the Mother Road was bypassed, he founded the Historic Route 66 Association of Arizona to campaign for "Historic Route 66" signage on the former US highway. Before long, similar initiatives were established in every U.S. Route 66 state.

"To think that the United States government decommissioned Route 66 in 1985 and told the world 'the end of an era,'" said Mr. Delgadillo. "Well, it was gone, but the fact that we brought it back, we helped to preserve a little bit of America that had been discarded, thrown away, lost forever. In America, we bury more of our history than we can rebuild. The European countries, they preserve and preserve, and we don’t. So we have saved a little bit of America"
© www.legendsofamerica.com 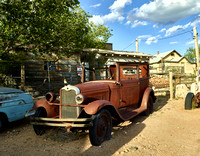