The oldest town along this old stretch of the road, Hackberry's origin dates back to 1874 when prospectors set up a mining camp on the east side of the Peacock Mountains. After having discovered rich deposits of silver, the Hackberry Silver Mine was soon established and named for a large Hackberry tree growing near a spring adjacent to the mine. Before long, the valuable ore warranted a 5 stamp mill, which quickly doubled its capacity. Reportedly, this rich vein was about 40 feet in width, amounting to large amounts of silver being taken from the mine.

When the railroad came through in 1882, the small settlement moved some four miles from the original site. The "new” town of Hackberry became an important loading point for large cattle shipments, soon ranking third in the state in volume shipped. Between the cowboys, the miners, and railroaders, the transient town inevitably boasted its share of shooting, fighting and faro. In 1917 an elementary school was built in Hackberry, which can still be seen on the eastern edge of town.

Though not entirely played out, the Hackberry Silver Mine closed in 1919, due to litigation among the owners, but not before it earned almost 3 million dollars in silver production. After the mine closed down, Hackberry came to a slow crawl, but was revived by Route 66, when it came through. Becoming a bit of a tourist town, it hung tight until I-40 bypassed the entire northern loop from the Crookston exit to Kingman, Arizona.
© www.legendsofamerica.com 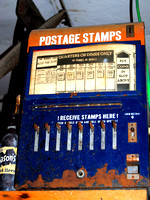 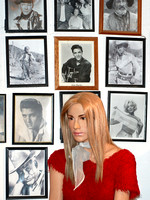 Hackberry, AZ - Bird on a Fence 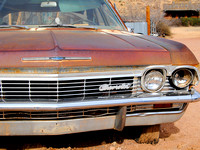 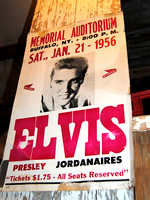