Settled along the banks of the South Fork River between Sutter's Mill and Mormon Island is Coloma, California -- the first important mining town of the 1848 gold rush days. It was here, on the South Fork River, that James Marshall first found the gold that started the great California Gold Rush. News spread quickly and by the time it reached San Francisco, thousands began to flood the area.

James Marshall was a construction foreman for Johann (John) Augustus Sutter, who operated Sutter's Mill on the banks of the American River. Sutter had come to California from his native Switzerland in 1834. By 1839, he had settled in the heart of the Sacramento Valley, where he wanted to establish a "great colony.”
© www.legendsofamerica.com 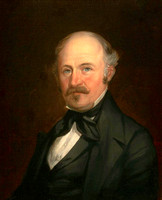