From an early age, Marta Becket showed amazing creative talents, including dancing, playing the piano, and artistic qualities. As a young woman, she danced at Radio City Music Hall, and on Broadway in New York City, appearing in Showboat, A Tree Grows in Brooklyn, and A Wonderful Town. In 1962, she was married and soon began to tour the country.

In 1967, after months of touring, she and her husband decided to take a vacation camping in Death Valley. However, one morning, they awoke to find a flat tire on their trailer. Directed to Death Valley Junction by a park ranger to have the tire repaired, Marta was fascinated with the old buildings, and discovered the old theater. Peering through a small hole in the door at the back of the building, she immediately knew this place was meant for her.

Having always wanted to design her own costumes, choreograph her own dances, and create her own show, she and her husband located the town manager. The very next day, they agreed to rent the abandoned theater for $45.00 a month and assume responsibility for repairs. Originally called Corkhill Hall, she renamed the theater the Amargosa Opera House and almost a year later, on February 10th, 1968; she gave her first performance to an audience of just 12 adults.
Soon began to paint an audience on the wall. From 1968 to 1972, characters from the past including kings and queens, Native Americans, bullfighters, gypsies, and more took shape. After four years of painstaking work, she then began painting the ceiling with cherubs, billowing clouds and ladies playing antique musical instruments. It was completed in 1974.

With help and legal advice from friends, and through the Trust for Public Land based in San Francisco, the Amargosa Opera House, Inc. bought the town of Death Valley Junction. On December 10th, 1981, it was listed in the National Register of Historic Places. 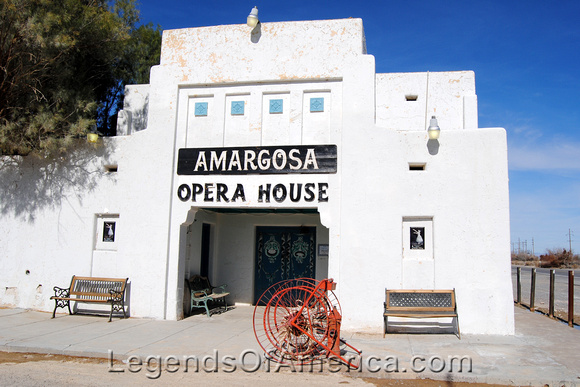