San Carlos Borromeo de Carmelo Mission, also known as the Carmel Mission, is a Roman Catholic mission church in Carmel, California. It is on the National Register of Historic Places and a U.S. National Historic Landmark.
It was the headquarters of the original upper Las Californias Province missions headed by Father JunÃ­pero Serra from 1770 until his death in 1784.
The mission also was the seat of the padre presidente, Father Fermin Francisco de Lasuen. It was destroyed in the mid-19th century, only to be restored beginning in 1884. It remains a parish church today. It is the only one of the California Missions to have its original bell tower dome. Photo by Carol Highsmith.
No EXIF information is available
Categories & Keywords
Category:Architecture and Structures
Subcategory:Places of Interest
Subcategory Detail:
Keywords:california, carmel, download, image, mission, photo, picture, print, spanish, stock
www.legendsofamerica.com 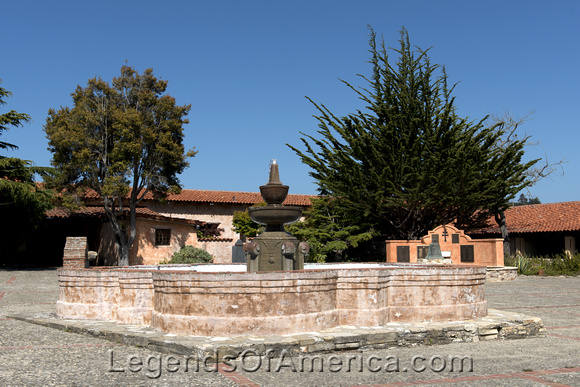