From late 1821, when William Becknell left Franklin, Missouri with pack animals weighed down with American goods and headed for the exciting yet dangerous border town of Santa Fe, until 1880, when the first locomotive followed, warehouses and supply stores were much in demand along the Santa Fe Trail. M. R. Whiteman built this house as a freighting depot for the Andres Daws stage line. It was later used by the Dold Brothers (also spelled Dahl), who operated a freight line between Missouri and Las Vegas, New Mexico. In 1861 it became a Trading Post and Indian Agency and served as a commissary for Lucien Maxwell. In 1873 it was a general store run by Henry Miller Porter and Asa F. Middaugh and two years later it had become the office of the new Cimarron News and Press. The Lail family has used it as a residence since 1908. The original adobe structure was severely damaged by fire in 1939.
Photo by Kathy Weiser-Alexander.
No EXIF information is available
Categories & Keywords
Category:City Scenes
Subcategory:Buildings
Subcategory Detail:
Keywords:cimarron, commercial, dolby, download, downtown, ghost town, image, new mexico, photo, picture, print, santa fe trail, stock, warehouse
© www.legendsofamerica.com 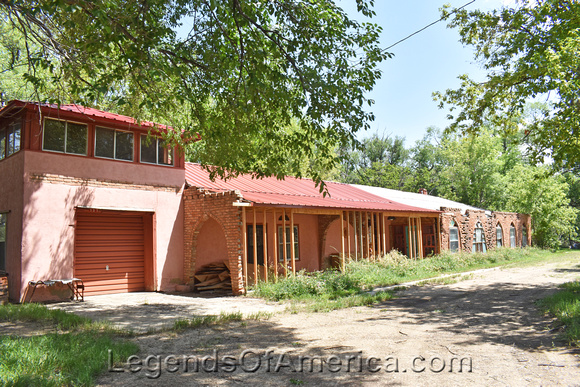