Situated on a peninsula between the Gulf of Mexico, the Atlantic Ocean, and the Straits of Florida, the Sunshine State has the longest coastline in the contiguous United States. Since the first European contact was made in 1513 by Spanish explorer, Juan Ponce de Leon – who named it La Florida, meaning "Flowery Land", Florida was a challenge for the European colonial powers before it gained statehood in the United States in 1845.

Today, Florida's culture is a reflection of influences and multiple inheritance; Native American, European American, Hispanic and African American heritages can be found in the architecture and cuisine.
© www.legendsofamerica.com 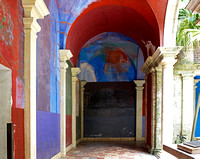