Like other native tribes, the Apache had a number of dances they performed primarily for religious reasons. Some of these included a medicine dance for healing, rain dances, spirit dances, and a puberty ceremony for Apache girls called the Sun Dance. Each noted event was generally celebrated with a feast and a dance, with tribal medicine men presiding over all religious ceremonies.

They believed in many supernatural beings including Usen, the Giver of Life, to be the most powerful of them all. The Gans, or Mountain Spirits, were especially important in Apache ceremonies. Males garbed themselves in elaborate costumes to impersonate the Gans in ritual dance, wearing kilts, black masks, tall wooden-slat head-dresses, and body paint.

Music for dances was sung by warriors, without words, but only tones and sounds, often accompanied by a buck-skin-on-a-hoop. For many of these ceremonies, the dances were followed by amusements including horse and foot races and other games. 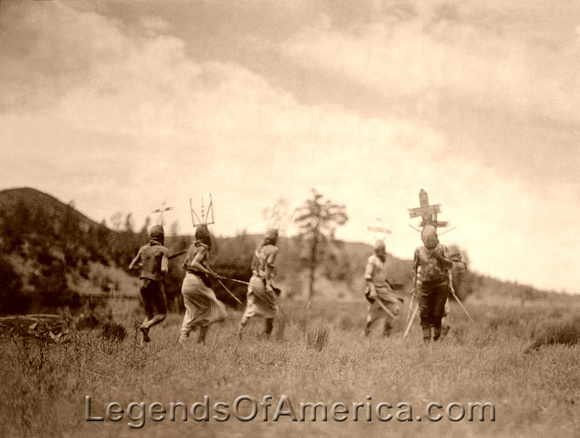