Officially called the Commonwealth of Kentucky, the "Blue Grass State" was originally part of Virginia. In 1792 Kentucky became the 15th state to join the Union. The origin of Kentucky's name comes from an Iroquois word meaning "meadow lands." Once inhabited by varying cultures of Native Americans from as far back as 1000 BC, the Indians roamed the region, particularly along the waterways and in areas of game. When European and colonial explorers and settlers began entering Kentucky in greater numbers in the mid-18th century, warfare broke out because the American Indians considered the settlers to be encroaching on their traditional hunting grounds.
© www.legendsofamerica.com 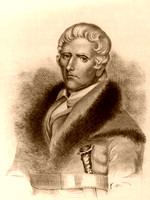