Promoted as the World's largest hand dug well, The Big Well in Greensburg, Kansas has been an attraction for years. Completed in 1888, the well is 109 feet deep and 32 feet wide, and was used as the area's water supply until 1932. In 1937 it was opened as an attraction, then in 1972 the U.S. Government designated it a National Museum. In 1974 it was awarded as an American Water Landmark by the American Water Works Association.

The visitors center and gift shop were destroyed in a devastating EF5 Tornado that practically wiped out the town of Greensburg on May 4, 2007. But, as with the rest of Greensburg, the museum would be rebuilt, this time even bigger, reopening in May of 2012. This is the visitors center as it looked in Greensburg a year before the tornado. Photo by Kathy Weiser-Alexander.
No EXIF information is available
Categories & Keywords
Category:City Scenes
Subcategory:Buildings
Subcategory Detail:
Keywords:before, big, breensburg, buy, commercial, download, editorial, image, kansas, photo, picture, print, purchase, restored, stock, tornado, vintage, well
© www.legendsofamerica.com 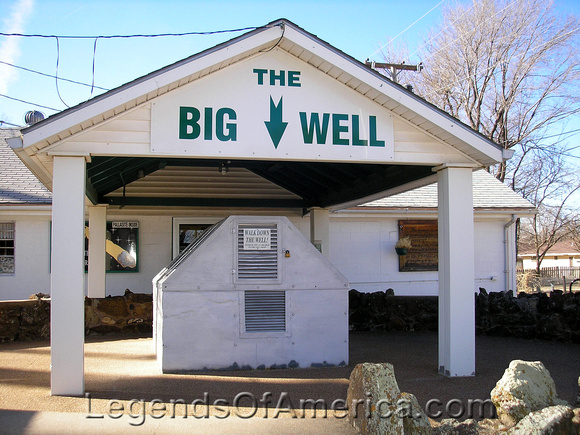