The Alvie Henson Mill in Chetopa, Kansas was built in 1896. The main mill was situated in 2.5 story brick and frame building set on a sandstone foundation. The flour mill was first powered by the Neosho River and later by electricity. Alvie Henson also invented the first pecan harvester, which was much appreciated in this area of pecan production.

Over the years, various additions were necessary to keep pace with milling technology. Later, it appears that one building in the complex served as a restaurant and another as a store. These have been closed since 1993. The complex was listed for sale in 1996, and is still for sale as of this writing. A sign posted in the yard stated the mill complex, which includes four buildings can be bought for just $29,500. Photo enhanced to bring out the words on the sign. Photo by Kathy Weiser-Alexander.
No EXIF information is available
Categories & Keywords
Category:City Scenes
Subcategory:Buildings
Subcategory Detail:
Keywords:alvie, building, buy, chepota, commercial, complex, download, editorial, flour, henson, historic, image, kansas, mill, photo, picture, print, purchase, stock
© www.legendsofamerica.com 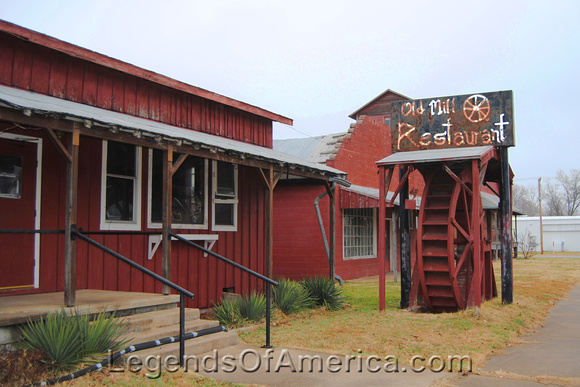