At the time Kansas was organized as a territory in 1854 the means of transportation west of the Mississippi River were extremely limited. Immigrants came by water from St. Louis to what is now Kansas City, Missouri, from which point the trip westward toward the interior of the state had to be made with wagons, over a country where even wagon roads had not yet been established. Under these conditions the question of better transportation facilities was one which early engaged the attention of the Kansas pioneers. In 1834, twenty years before the passage of the Kansas-Nebraska Bill, Dr. Samuel K. Barlow of Massachusetts advocated the building of a railroad through the western country which he had just visited.

Three years later Dr. Hartwell Carver, in a communication to the New York Courier and Inquirer, suggested a railroad from the Mississippi River to the Pacific Coast, if possible, and at any rate, to the head of navigation on the Columbia River.
© www.legendsofamerica.com 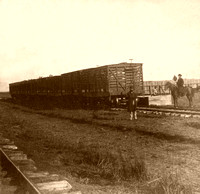 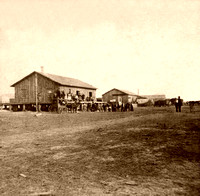