85 photos
One of the original 33 counties created by the first Territorial Legislature, Marshall County is located in northeast Kansas and Marysville is its county seat.

Rich in history, Marshall County was for years, a vast prairie covered with a waving sea of wild grasses and large herds of buffalo that for centuries had wandered almost unmolested across them. Nothing disturbed the solitude, save an occasional band of Indians in search of prey or the hardy frontiersman who is always found far in advance of the onward march of civilization. The first known white men to visit the area were the explorers of Stephen Long’s Expedition, who passed through the area in 1819 and 1820 on their way from Pittsburgh, Pennsylvania to the Rocky Mountains. General John C. Fremont led a similar expedition through what is now Marshall County in the early 1840’s, and in 1847 John Smith, the Mormon Apostle, with his band of followers from Illinois, opened a permanent trail crossing the Big Blue River six miles below the present-day city of Marysville. The spot was afterwards called "Mormon" as it it became a regular camping place for Mormon people who, in the next two years, crossed the plains by the thousands. In 1849 this trail was used by California gold hunters and the place was called "California Crossing." Later it was known as Independence Crossing.

It was at this popular crossing that the first settler, A.G. Woodward, made his home in 1848. The next year, the Military Route from Fort Leavenworth to the Great Salt Lake was surveyed, which located a more practical crossing of the Big Blue River, about six miles above the old ford.
© www.legendsofamerica.com 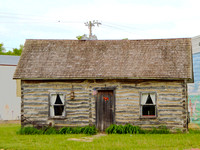