The Mono County Courthouse in Bridgeport, California. Mono County was created on April 21, 1861, as the first California mining county on the eastern slope of the Sierra Nevada. The county seat was established at Aurora, but a state boundary survey in 1863 revealed that Aurora lay in the Nevada Territory, three miles from the California border. The presiding judgeimmediately shut down the courthouse in Aurora and decreed that no more cases could be tried there.

Mono County voters selected Bridgeport as their new county seat. In 1880, this Italianate courthouse was completed.

A plaque mounted by the main entrance reads:


Mono County Court House
Since April 1, 1881, with the trial of Morton, indicted for theft of gold bullion from the Standard Co. of Bodie, the scales of justice in this building have continuously weighed the problems of Mono County from infancy to this present day. This impressive building remains a classic example of the artisans of yesterday. Photo by Carol Highsmith.
No EXIF information is available
Categories & Keywords
Category:City Scenes
Subcategory:Buildings
Subcategory Detail:
Keywords:
© www.legendsofamerica.com 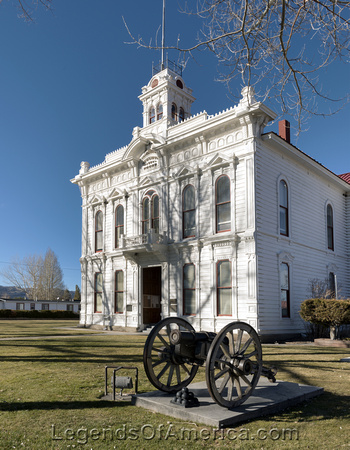