Mabel Paige (December 19, 1880 – February 9, 1954) - An American stage and film actress, Mabel was born in New York, New York and began acting at the age of four. She went on to appear in dozens of popular stage plays and was acclaimed as the "Idol of the South." Her Mabel Paige Theatrical Company toured the region for many years. She later acted in more than 50 films between 1914 and 1953. In her first silent films for the Lubin Company, she co-starred in romantic comedies with Oliver Hardy as her leading man. She died in Van Nuys, California from a heart attack on February 9, 1954.
No EXIF information is available
Categories & Keywords
Category:People
Subcategory:Celebrities
Subcategory Detail:
Keywords:actress, advertisement, california, download, editorial, idol of the south, image, mabel paige, model, new York, performer, photo, photo, print, restored, silent film, stage, stock, vintage, woman
© www.legendsofamerica.com 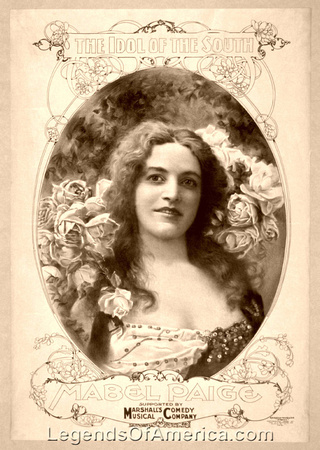