On May 15, 1930 the famous La Posada Harvey House Hotel opened its doors for business. The last one built in the famous Harvey hotel and restaurant chain, Winslow was chosen for the site, as it was the headquarters for the Santa Fe Railway. Designed by Mary Colter, the famed Grand Canyon architect, she paid careful detail to blending the aspects of both the Native American and Spanish cultures of the area into the hotel.

In 1957, the beautiful La Posada Hotel was closed. Two years later, all of its museum-quality furnishings were auctioned off. In the early 1960s much of the building was gutted and transformed into offices for the Santa Fe Railroad. The hotel was once again resurrected in the mid 1990's and saved from demolition. After a long process of restoration, it is once again taking guests. Photo by Kathy Weiser-Alexander.
No EXIF information is available
Categories & Keywords
Category:City Scenes
Subcategory:Buildings
Subcategory Detail:
Keywords:Arizona, buy, commercial, court, download, editorial, harvey house, hotel, image, la pasada, lodging, photo, picture, print, purchase, railroad, route 66, stock, winslow
© www.legendsofamerica.com 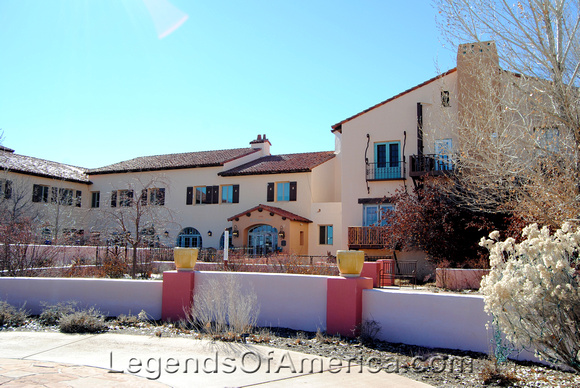