Canned goods and canning jars at the general store that is part of the Spindletop-Gladys City Boomtown park, a re-creation of portions of the oil boomtown of Gladys City, Texas. This was intended by its founder, Pattillo Higgins -- a geologist and businessman who named the town after Gladys Bingham, a Sunday school student of his -- as a sort of "industrial utopia" at the Spindletop drilling site outside the little settlement of Beaumont, with oil production and a idealistic townsite of progressive businesses, churches, parks, and factories. These plans changed forever on January 10, 1901, when the "Lucas Gusher" (named for Higgins' business partner, Anthony Lucas) blew, sending "black gold" (crude oil) 150 feet into the air and raining it down on happy workers and investors. The gusher had tapped into a gigantic underground field of oil that changed Texas -- and America -- forever, and prompted an oil rush of thousands of "boomers," some of whom struck it rich. But Higgins was not one of them. The discovery of vast amounts of oil put an end to easterner John D. Rockefeller's virtual worldwide monopoly on oil.

Gladys City's original buildings survived until the 1950s, when another discovery -- of sulphur -- at Spindletop prompted the owners to bulldoze the old site. Many buildings from the site were reconstructed at their present site as a U.S. Bicentennial project, completed in 1976. The site is now managed by Lamar University, based in Beaumont.
No EXIF information is available
Categories & Keywords
Category:City Scenes
Subcategory:Buildings
Subcategory Detail:
Keywords:
© www.legendsofamerica.com 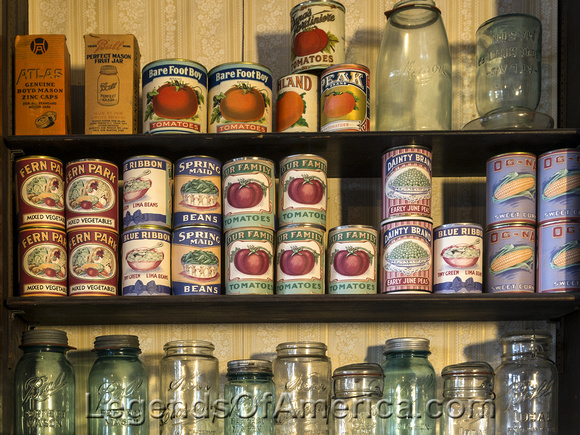