The Overholser Dam was built in 1917 and 1918 to impound water from the North Canadian River west of Oklahoma City. The dam was added to the National Register of Historic Places in 2007. By 1910 the City's population was at 32,000, a growing meatpacking industry was in place, and the City had been newly designated as the state capital. From the Land Run forward, Oklahoma City had depended on raw water from the North Canadian and a handful of water wells.
In 1916, under the leadership of Mayor Ed Overholser, citizens voted $1.5 million in bonds – about $26 million in today's dollars – to build the dam and reservoir at a location that was then eight miles west of town. Photo by David Fisk.
No EXIF information is available
Categories & Keywords
Category:Architecture and Structures
Subcategory:Bridges
Subcategory Detail:
Keywords:Oklahoma, Overholser, bridge, dam, david fisk, prints, stock image
© David Fisk 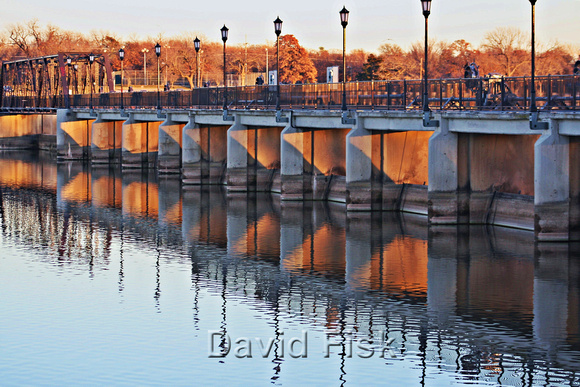