The Pea Ridge Campaign began Christmas Day 1861, when General Samuel R. Curtis was appointed to command the Federal Southwestern District of Missouri. His main objective was to drive out the Confederates, and by mid February, 1862 his troops had chased Major General Sterling Price and the pro-Confederate Missouri State Guard into Arkansas.
© www.legendsofamerica.com 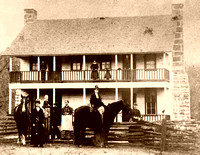