The Ruby Mercantile was first opened in the late 1880’s by a man named George Cheney. In 1897, it was purchased by Julias Andrews. More than a decade later, Andrews applied for a post office, which opened in the store in April, 1912. He named the post office, and effectively, the town -- Ruby, for his wife, Lillie B. Ruby Andrews.

In 1914, Andrews sold the store to Philip C. Clarke, who soon built a bigger and better one just up the hill, the remains of which still stand today. In early 1920 the store changed hands again, bought by John and Alexander Fraser, who were found shot in the store less than two months later by Mexican bandits. Family members were approached by Frank Pearson about the store, and although they warned him of the dangers, Pearson and his wife and daughter moved in. Less than a year later in August of 1921 the couple would also be dead. The murders sparked a huge manhunt and resulted in Ruby citizens petitioning the U.S. War Department for protection. Photo by Kathy Weiser-Alexander.
No EXIF information is available
Categories & Keywords
Category:City Scenes
Subcategory:Buildings
Subcategory Detail:
Keywords:arizona, building, buy, commercial, doors, download, editorial, ghost town, image, mercantile, old, photo, picture, print, purchase, ruby, ruins, store
© www.legendsofamerica.com 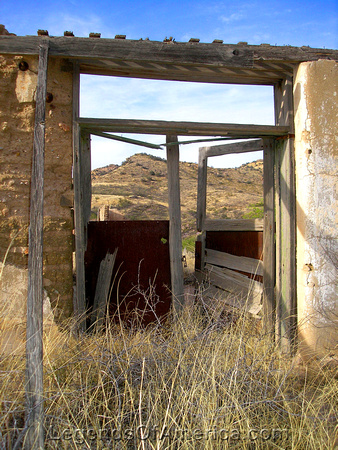