The oldest operating saloon in Deadwood, South Dakota is the Bodega Saloon at 664 Main Street. The building was first constructed as the offices of the Northwest Express, Stage & Transportation Company in 1880. However, in 1893, the Bodega Saloon was established by W.H. Carter. In 1899, Deadwood's first "moving pictures" were shown here. In 1902, the saloon was remodeled and over the years, a variety of businesses were held in the basement and upper floors of the saloon, but the Bodega remained on the first floor.

In the beginning, the upper floor was used by the Mason, then later by the Eagles and the Elks until 1904. Later, the upper floor was utilized as a brothel, called Fern's Mecca Rooms. Run by Ellen Lucille Moore, who was more familiarly called "Big Lu" because of her massive 300 pound frame, the brothel thrived during the 1930's. However, in 1943, she was arrested for "white slavery" and the brothel was closed.
Photo by Kathy Weiser- Alexander.
No EXIF information is available
Categories & Keywords
Category:Architecture and Structures
Subcategory:Buildings
Subcategory Detail:
Keywords:bodega, bodega saloon, deadwood, download, image, image, photo, photo, photograph, picture, print, saloon, south dakota, wild bill hickok
© www.legendsofamerica.com 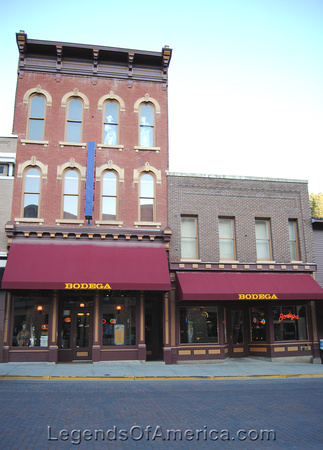