Located at 928 Main Street in Deadwood, South Dakota is the historic Fairmont Hotel, built in 1898 . Originally known as the Mansion House, the basement featured a Turkish bath and a barber shop. Almost from day one, the upstairs rooms were utilized mostly by "painted ladies."

Illegal activities were the "norm" in the hotel, as in 1915, the police discovered illegal gambling devices in the basement, which were then removed, piled behind the courthouse and burned as a public display.

Continuing its wanton disregard for the law, the Fairmont became a speakeasy during Prohibition. In later years, the hotel became more of a flophouse.
Today, however, substantial restoration work has been performed on the building that now serves as a casino. The lobby continues to retain many of its original features, including the pressed-tin ceiling, fixtures, and wainscoting. 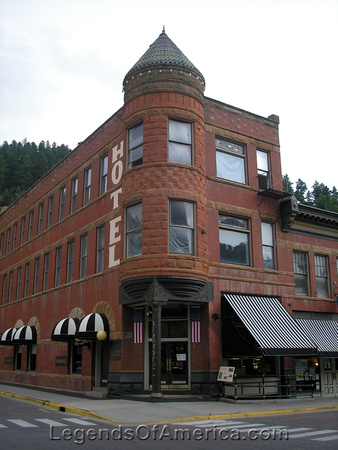