In 1881, Cochise County was split off from Pima County, and naturally, with Tombstone being the largest town, filled with some 10,000 people, it became the new county seat. Plans immediately began to build a new courthouse. In 1882, the courthouse was completed at a cost of nearly $50,000.

The Victorian style building, laid out in the shape of a cross, housed the county offices, including the courtrooms and the jail, which once housed all manner of lawless characters. Outside, the gallows, from which seven men, including those who participated in the Bisbee Massacre, would serve Tombstone's final justice.
No EXIF information is available
Categories & Keywords
Category:City Scenes
Subcategory:Buildings
Subcategory Detail:
Keywords:arizona, attraction, buy, camp, cochise county, commercial, court house, courthouse, download, editorial, ghost town, image, mining, old, old west, photo, picture, print, purchase, stock, tombstone, tourist
© www.legendsofamerica.com 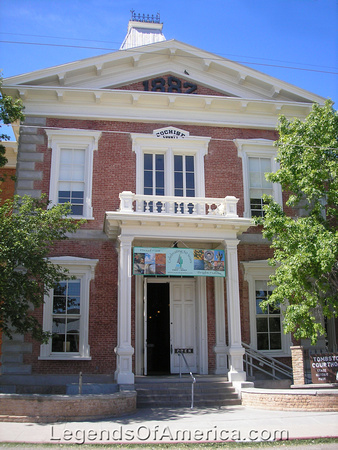