Called the "Volunteer State," Tennessee became the 16th state of the Union in 1796. It was the first territory admitted as a state under the federal Constitution. Before statehood, it was known as the Territory South of the River Ohio. The name Tennessee is derived from the name of a Cherokee village, Tanasi. Today, the capital, Nashville, is known as a center for country music. Memphis, the largest city in the state, is the place where Elvis Presley first began his legendary musical career. The state flower is the iris. Vintage and current images of historic cities and places in Tennessee. Includes events, people, vintage views of cities and small towns, and more.
© www.legendsofamerica.com 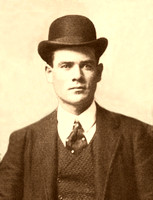