Tombstone Crystal Palace, by Frederick D. Nichols, 1937. Before the Crystal Palace Saloon, the Golden Eagle Brewery stood in its place, built in 1879. The "brewery” featured fine bock beer, a free lunch, a display of wild animals, and gambling. However, the establishment would be short lived when it suffered damage in Tombstone's first fire on June 22, 1881. The brewery did not reopen and in May 1882, when the town suffered yet another fire, the building was destroyed.

Afterward, Frederick Wehrfritz, built another building on the original site of the Golden Eagle Brewery, at the corner of the newly named streets of Fifth and Allen. On July 23, 1882, the Crystal Palace opened its doors for business.

Built to attract the "finer” elements of Tombstone, the saloon provided shining crystal tableware, elegant décor, the finest wines and spirits, and as many as five bartenders standing on duty to quickly serve their patrons around the clock. From the start, owner Wehrfritz also insisted on strictly honest games of chance. Though it was just one of 110 establishments licensed to sell liquor in the booming city, the new establishment soon attracted the most prominent businessmen. Open 24 hours a day, the Crystal Palace attracted everyone from the doctors, to lawyers to mining officials, as well as other hangers-on wishing to "rub” elbows with the prominent, but would brook no "funny business” within its walls, protecting itself from the many bullet holes found in other "lesser” establishments in the community.
Vintage photo restored by Kathy Weiser-Alexander.
No EXIF information is available
Categories & Keywords
Category:City Scenes
Subcategory:Buildings
Subcategory Detail:
Keywords:arizona, attraction, bar, buy, camp, commercial, crystal palace, download, editorial, ghost town, image, mining, old west, photo, picture, print, purchase, saloon, stock, tavern, tombstone, tourist, vintage
© www.legendsofamerica.com 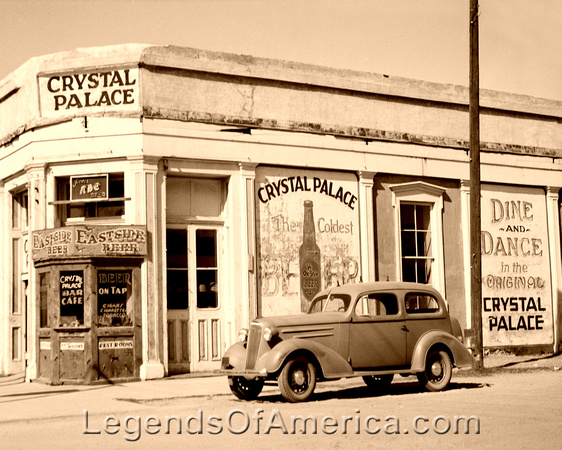