Straddling the border between Texas and New Mexico is the forgotten ghost town of Glenrio. Once a monument along the boom and bust highway of Route 66, it now remains home to only the critters and the blowing tumble weeds of the vast prairie.

In 1901 the Chicago, Rock Island and Pacific Railroad came through the area and two years later Glenrio was born. The name Glenrio, which stems from the English word "valley” and the Spanish word for river, is neither in a valley nor along a river.

By 1920, Glenrio had a hotel, a hardware store, and a land office, as well as several grocery stores, service stations, and cafes. A newspaper, the Glenrio Tribune, was published from 1910 to 1934. There were no bars on the Texas side of the community, since Deaf Smith County was dry, and no service stations on the New Mexico side because of that state's higher gasoline tax.

Today, it has no residents.
© www.legendsofamerica.com 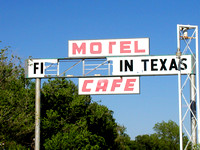 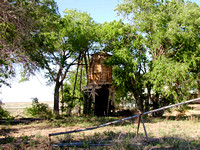