Edward Dorris, a stagecoach driver, died of a sunstroke or a heart attack enroute to Bent's Old Fort, a Barlow and Sanderson stagecoach station in the 1860's. Like others who had gone before him, the hardship of life on the Santa Fe Trail ended here at Bent's Fort. Of the 13 graves located in this cemetery, twelve are covered with adobe bricks while Dorris' grave is covered with limestone and marked. This may be the cemetery described by visitors to Bent's Fort in the 1840's.
"In the evening another Missouri volunteer died, and was buried. They were obligeed to cover the graves with prickly pear, or cocks to prevent the wolves from tearing the bodies out of the ground ..." Lieutenant Albert, US Army of the West, 1847.
The cemetery has never been completely excavated.
No EXIF information is available
Categories & Keywords
Category:City Scenes
Subcategory:Documentary
Subcategory Detail:
Keywords:Colorado, bent's fort, bents fort, cemetery, commercial, download, driver, editorial, edward dorris, ghost town, grave, image, marker, monument, photo, photograph, picture, print, santa Fe Trail, stagecoach, stock, trading post
© www.legendsofamerica.com 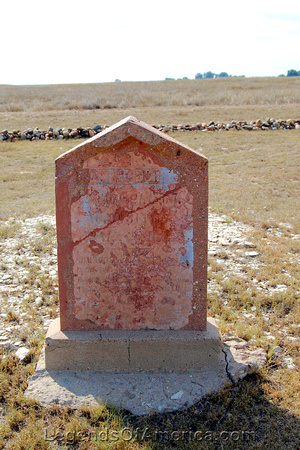