A Gambler in 1930, from National Photo Company Collection.
During the Great Depression of the 1930's, people looked desperately for inexpensive leisure pursuits, as their spendable income decreased dramatically. Parlor and board games, as well as stamp collecting became popular hobbies. When Parker Brothers introduced the game of Monopoly in 1935, 20,000 sets were sold in one week. Additionally, interest in spectator sports, such as baseball, grew making stars of players like Lou Gehrig and Joe DiMaggio.

Ironically, during this time of economic hardship, gambling also increased dramatically, as people sought any means to add to their income. In this decade alone 15 states legalized horse racing.

Though the vast majority of the nation was having a hard time making ends meet, the tuxedoed man above plays a gentleman's man of poker like he had not a care in the world. 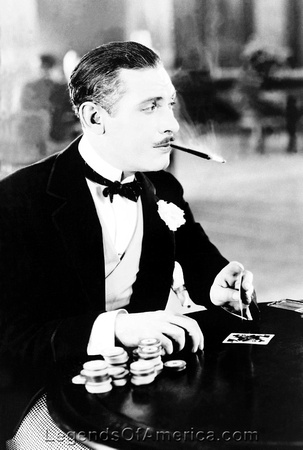