During the Civil War a number of permanent military camps, forts, and blockhouses existed in Kansas. In all, at least twenty-seven were located in various areas of the state. These camps and forts had some similarities, but many differences existed among them.

The forts in Civil War era Kansas had at least one similarity. All were maintained by the Union; no Confederate forts existed in the state. The differences among the forts were striking. Some forts were established by the regular Army to protect travelers and settlers against Indians. Forts Aubrey, Harker, Larned, Riley, and Dodge were among these.
© www.legendsofamerica.com 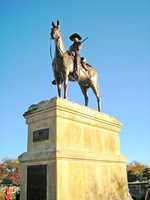