Also called Queresan, and Queres, Keres is a group of seven related languages spoken by Keres Pueblo peoples in New Mexico. Each is mutually intelligible with its closest neighbors, but there is significant diversity between the Western and Eastern groups. This linguistic family of Pueblo Indians includes the inhabitants of several villages on the Rio Grande, in north central New Mexico, between the Rito de los Frijoles (at Bandelier National Monument) and the Jemez River, as well as on the latter stream from the pueblo of Zia to its month. The west division, comprising the Acoma and Laguna Pueblos, are situated westward from the Rio Grande, the latter on the San Jose River. Like the other Pueblo tribes of New Mexico, the Keresan Indians maintain that they had their origin at the mythical Shipapu and that they slowly drifted southward to the Rio Grande, taking up their abode in the Rito de los Frijoles, or Tyuonyi, and constructing there, the cliff dwellings found today excavated in the friable volcanic tufa.
© www.legendsofamerica.com 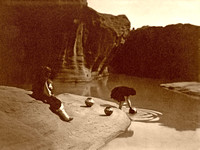