88 photos
Soon after the first settlements in North America were made, missionaries began to visit the Native Americans for the purpose of instructing them in the Christian religion and to persuade them to adopt the customs of civilization. The Catholic Church was especially active in this work. Early in the 17th century Jesuit missionaries crossed the ocean and began the establishment of missions. While the Jesuit father was something of a fanatic in his religious views, he was generally a man of courage, filled with a sincere devotion to his calling, and loyal to his king. As the white settlements grew in number and strength, the Protestant denominations also became interested in the welfare of the Indians and sent missionaries among them.

Noble L. Prentis, in his 1899 book, A History of Kansas, said: "The missionaries were heroic pioneers of Kansas. They invented phonetic alphabets; the created written languages, wrote dictionaries and song books, and gave to the Indian the Bible and the Christian religion.
© www.legendsofamerica.com 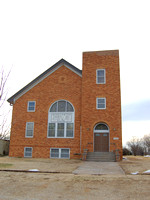