Located at the foot of two of Colorado's highest peaks - Mt. Elbert and Mt. Massive, Leadville is one of America's last remaining authentic mining towns. The settlement began in 1859, when gold was discovered in California Gulch. But, it would be silver that would really put Leadville on the map. By 1893, the estimated population reached almost 60,000. At it's very height, Leadville was doomed to become a ghost town, when in 1893, the United States moved to the gold standard, which created a great depression in the area and resulted in the closing of most of the silver mines. By 1896, the area mines had produced more than 200 million dollars in ore. Though still labeled a ghost town, as its booming heydays are long past, Leadville is still called home to more than 2,500 people.
© www.legendsofamerica.com 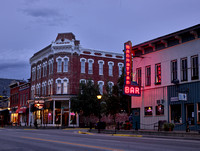 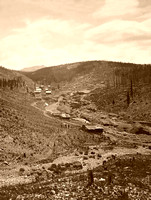