Clinton F. Woolsey was considered one of the nation's best pilots in the Army Corps during the 1920's when he died in a mid-air collision near Buenos Aires. Woolsey had dreams of flying solo across the Atlantic, but never got a chance to see that come true. One of his 1925 flight students would though, as Charles Lindbergh would be the first the same year Woosley died in 1927.

In 1934, his father Byron Woolsey donated 80 acres of land to the Leelanau Township to be used as an airport in honor of his son. The Township threw in another 120 acres, and the Works Progress Administration converted the farm into a long grassy runway, and the onsite creamery/milk transfer station into a terminal. The new airport was dedicated in July of 1935. Photo by Kathy Weiser-Alexander.
No EXIF information is available
Categories & Keywords
Category:City Scenes
Subcategory:Buildings
Subcategory Detail:
Keywords:Michigan, buy, commercial, download, editorial, image, leelanau, peninsula, photo, picture, print, purchase, stock
© www.legendsofamerica.com 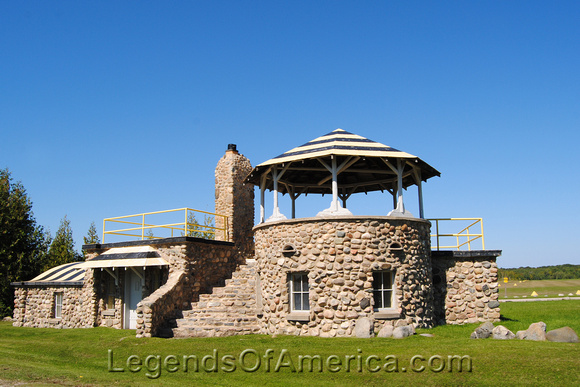