Ruins of the Mutz Hotel in Elizabethtown, New Mexico. In 1870, Elizabethtown boasted 7,000 residents, seven saloons, three dance halls, five stores, a school, and two churches. One of several hotels, the Mutz Hotel was built by Herman Mutz, a rancher and cattleman of the area. The money collected from liquor licenses was earmarked for schools.

However, the town would begin to decline as the gold "panned out." In 1903, Elizabethtown suffered tragedy when a fire destroyed most of the town. The Mutz Hotel was then rebuilt of stone, but the town never recovered. Before long, the hotel closed its doors but remained standing intact for decades. Suffering from neglect, curious people still continued to frequent the site. Unfortunately, a camper set a fire in the old hotel, which further destroyed its remains. Today, even the skeleton of its remains (shown above), have been reduced to just a couple of low walls, and scattered stones. Photo by Dave Alexander, 2004.
No EXIF information is available
Categories & Keywords
Category:City Scenes
Subcategory:Buildings
Subcategory Detail:
Keywords:Colfax county, Elizabethtown, buy, camp, commercial, download, editorial, ghost town, ghosttown, image, mine, mining, mutz hotel, new mexico, old, photograph, picture, print, purchase, stock, town
© www.legendsofamerica.com 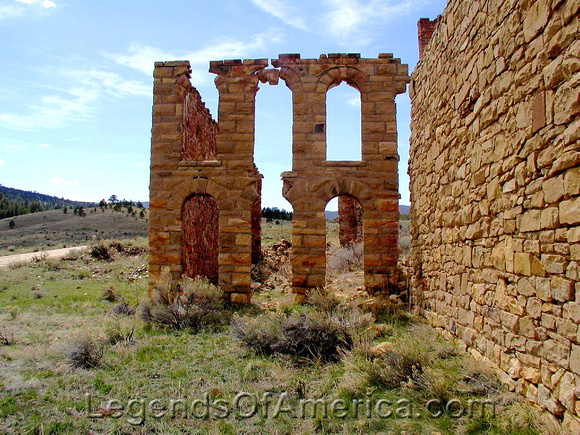