1890's vintage photo of Mississippi River Gambling.
In the early 1800's, as people began to push westwards, gambling along the Missouri River thrived, not only on the riverboats themselves, but also in the many cities that flourished along its banks. The spirit of risk taking, adventure and opportunity of the "West," made those who left the "East" natural-born gamblers, and during this time, a professional gambler was as legitimate as any other profession, such as law or medicine.

As the Mississippi River connected waterways for numerous trade avenues these, many gambling establishments were popular, not only with professional gamblers, but with many of the cash-laden travelers and traders.
But, as in any other "profession," there were those who were unscrupulous and numerous gamblers quickly gained reputations as sharps or sharpers. These dishonest men often utilized cheating tactics and operated confidence games in order to bilk unsuspecting travelers.
Their reputations became so terrible that the public began to blame them for endangering the streets of their cities and debasing the morality of society. As often happened in the West, vigilantes, fed up with these dishonest gamblers, lynched five cardsharps in Mississippi in 1835.
Vintage photo restored by Kathy Weiser-Alexander.
No EXIF information is available
Categories & Keywords
Category:Lifestyle and Recreation
Subcategory:
Subcategory Detail:
Keywords:buy, commercial, download, editorial, gambling, game, mississippi river, photo, photograph, poker, print, ship, steamboat, stock, vintage
© www.legendsofamerica.com 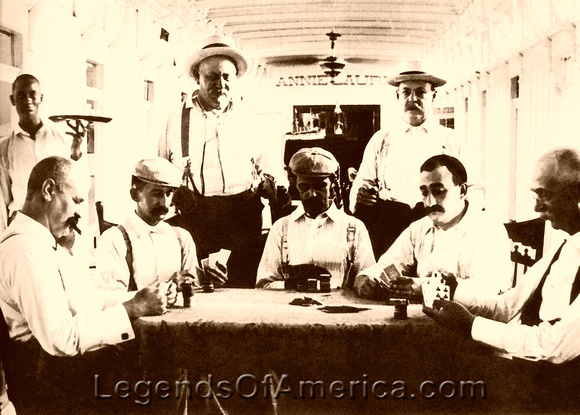