A quarrel over cards, by Frederic Remington, 1887.

In the Old West, quarrels over cards was quite common and often led to gunplay and other forms of violence. This happened so often that when Doc Holliday's tuberculosis became so bad that he could no longer be a dentist and he turned to gambling as a profession, he first took the time to build up his skills with a six-shooter and a long, wicked knife. Spending hours and hours practicing, his skills obviously paid off.

Though he would use these violent skills on a number of occasions, one of his many killings erupted while he was dealing Faro in Fort Griffin, Texas in 1877.

Doc was dealing cards to a local bully by the name of Ed Bailey, who was accustomed to having his own way without question. Bailey was unimpressed with reputation and in an attempt to irritate him; he kept picking up the discards and looking at them. Looking at the discards was strictly prohibited by the rules of Western Poker, a violation that could force the player to forfeit the pot.

Though Holliday warned Bailey twice, the bully ignored him and picked up the discards again. This time, Doc raked in the pot without showing his hand, nor saying a word. Bailey immediately brought out his pistol from under the table, but before the man could pull the trigger, Doc's lethal knife slashed the man across the stomach. With blood spilled everywhere, Bailey lay sprawled across the table. 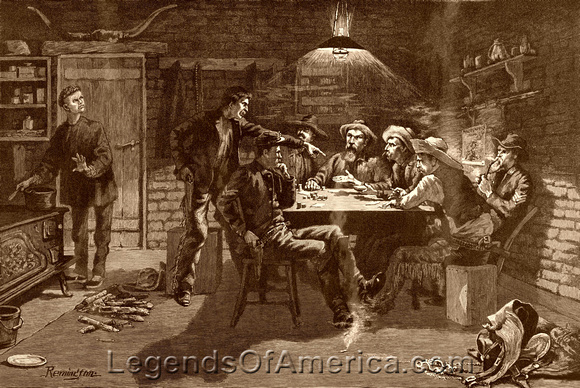