Also known by several other names including Clare, Clair, Thorp's Wells, Thorp, Montana Station, Summerville and Gold Mountain, mining began in the area in the 1880's and a small stamp mill was built at a site then known as Thorp's Wells. Serving several mines located near Gold Mountain some six miles to the northwest. It operated into the early 1900's when the Bonnie Claire Bullfrog Mining Company purchased it. A small camp formed and a stage line from Bullfrog to Goldfield ran through the camp, which was then called Thorp. Another small camp called Summerville also developed about a mile northwest, but it was short lived. In 1904, the company built a larger mill called the Bonnie Claire, which treated ore from all over the district. A post office called Thorp was established in June, 1905.


The camp grew slowly until September, 1906 when the Bullfrog-Goldfield Railroad reached the settlement. The new station was called Montana Station, but, when a townsite was platted the following month, it was called Bonnie Claire. However, the post office wouldn't be renamed from thorp to Bonnie Claire until 1909, due to issues with the government. The old mill operation now sits on private property. Photo by Dave Alexander.
No EXIF information is available
Categories & Keywords
Category:Architecture and Structures
Subcategory:Places of Interest
Subcategory Detail:
Keywords:Bonnie Claire, Nevada, commercial, desert, download, editorial, ghost town, image, mill, mine, mining, photo, photograph, picture, print, stock
© www.legendsofamerica.com 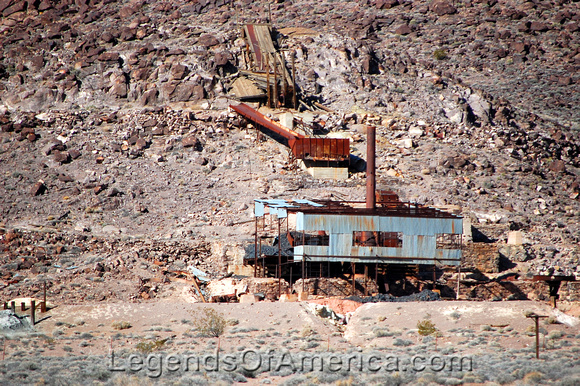