A landmark in Cody, Wyoming, the Irma Hotel was built by famed William F. "Buffalo Bill" Cody, the city's co-founder and namesake. Naming it for his daughter, Irma Cody, the hotel, which boasted that it was the most modern hotel in the Rockies, opened with a party on November 18, 1902, to which Cody invited the press and dignitaries from as far away as Boston. Within no time, it became the social center of the city. Buffalo Bill maintained two suites and an office at the hotel for his own personal use.
Irma Restaurant Grill Sign in Cody, Wyoming. Photo by Kathy Weiser-Alexander.
No EXIF information is available
Categories & Keywords
Category:City Scenes
Subcategory:Buildings
Subcategory Detail:
Keywords:Irma hotel, Wyoming, buy, café, cody, commercial, download, editorial, grill, image, neon, photograph, picture, print, purchase, restaurant, sign, stock
© www.legendsofamerica.com 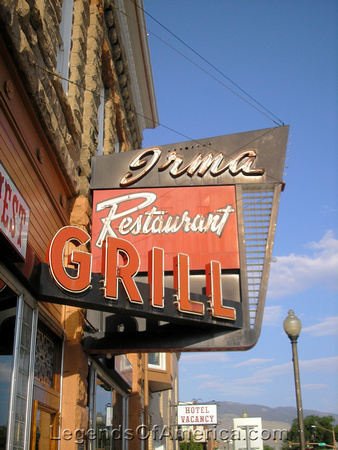