Sitting Bull, Lakota Chief, 1888.
At dawn on December 15, 1890, Sitting Bull was pulled from his cabin bed by Indian police, and when he resisted, the famous chief was shot and killed by an Indian police officer named Red Tomahawk. After his death he was buried in the post cemetery at Fort Yates, North Dakota . In 1953 what many believed were the remains of Sitting Bull were moved from Fort Yates to a memorial overlooking the Missouri River near Mobridge, South Dakota. However, many North Dakotans believe the wrong remains were moved and today both states staunchly claim to have Sitting Bull's burial site. More ...
No EXIF information is available
Categories & Keywords
Category:People
Subcategory:
Subcategory Detail:
Keywords:chief, commercial, download, editorial, image, indian, native american, photo, picture, print, stock
© www.legendsofamerica.com 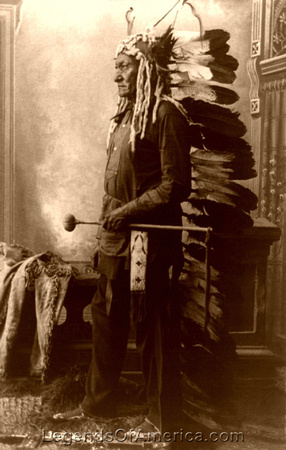