As Route 66 enters Villa Ridge, the "new" Diamonds Restaurant once stood at the intersection of MO-100 and US-66. The first Diamonds, built in 1927, was constructed in the shape of a baseball diamond, hence the name. Touted as the "World’s Largest Roadside Restaurant,” the business was established by Spencer Groof and also sold Phillips 66 gasoline, as well as renting cabins across the street. In 1948, the restaurant burned to the ground in a fire that blazed so so furiously that Route 66 had to be temporarily closed. Rebuilt, the Diamonds continued to operate at this location (west of exit 251) until 1967 when it was bypassed by the interstate. Picking up, lock, stock, and barrel, including their vintage sign, the business moved two miles eastward, but still did not survive. The original Diamonds building then began to house the Tri-County Truck Stop and Restaurant, which ironically, did live on beyond the Diamonds Restaurant but it, too, is closed today. The old truck stop is located at 144 Old Highway 66.
No EXIF information is available
Categories & Keywords
Category:City Scenes
Subcategory:Buildings
Subcategory Detail:
Keywords:building, commercial, download, editorial, image, missouri, motel, photograph, print, restaurant, route 66, sign, tri-county truck stop, villa ridge
© www.legendsofamerica.com 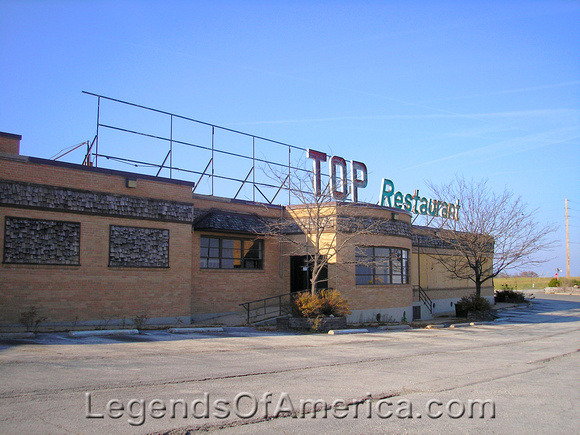