An old Zephyr Station west if Villa Ridge, Missouri is gradually being brought down by Kadzu. Photo by Kathy Weiser-Alexander.

The Zephyr gas station brand is one of the oldest independent brands in the United States, dating back to 1939 when the J. D. Street Company in Maryland Heights, Missouri branched out into gasoline marketing. The company was established in 1884 as a grease distributor.

At its peak, there were as many as 500 stations, branching out as far as Ohio and Florida. However, the gas crunch of the mid-70s, took its toll on the stations, and the company reigned back in, closer to home, with stations primarily in Missouri, Illinois, Indiana, Iowa and Kentucky. This old Zephyr Station, west of Villa Ridge, Missouri on the North Service road is one of its many casualties. The old station is just east of Pin Oak Creek Road on the south side.
No EXIF information is available
Categories & Keywords
Category:Architecture and Structures
Subcategory:Buildings
Subcategory Detail:
Keywords:abandoned, commercial, download, editorial, filling, fuel, gas, image, missouri, motel, photograph, print, route 66, service, sign, station, villa ridge, zephyr
© www.legendsofamerica.com 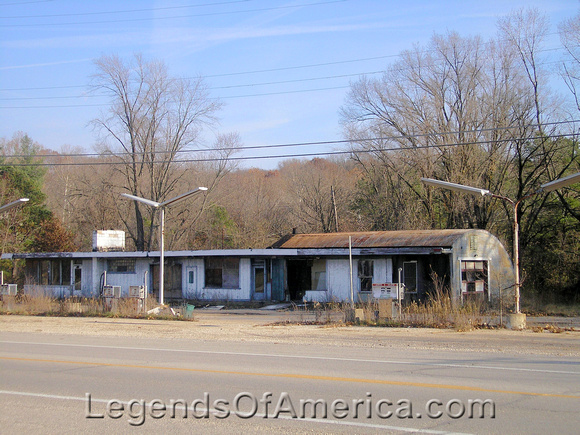