The Tiwa Indians, also known as Tigua, are a group of Tanoan Pueblo tribes which live in three geographic regions, including Taos and Picuris in northeast New Mexico, Sandia and Isleta near Albuquerque, New Mexico, and at Isleta del Sur, near El Paso, Texas. Traditionally, they spoke one of three Tiwa languages, though over the years, they began to switch to Spanish or English.

Tewa
Their name meaning "moccasins,” the Tewa are a group of Pueblo tribes belonging to the Tanoan linguistic family, who historically made their homes on or near the Rio Grade River north of Santa Fe, New Mexico. When Juan de Ciliate first encountered them in 1598 he named 11 Tewa pueblos and stated there were others. Thirty years later, Spanish missionary, Fray Alonzo Benavides, reported their population to be 6,000, living in 8 pueblos. After the Second Pueblo Revolt of 1680-1692, many fled to northeast Arizona, where they lived with the Hopi Indians. By the early 1900s their population had been reduced to about 1,200. In times past, each Tewa village was divided into two sections the Winter people and the Summer people, and the Chief of each village would alternate between the two groups depending upon the season. Today, the Tewa live primarily in the Nambé, Pojoaque, San Ildefonso, Ohkay Owingeh (formerly known as San Juan Pueblo), Santa Clara and Tesuque Pueblos in northeastern New Mexico; with some descendents also residing on the First Mesa Hopi Reservation in Arizona.
© www.legendsofamerica.com 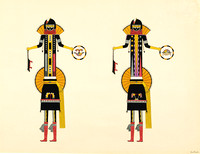 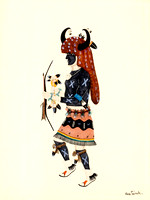 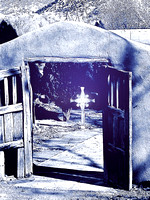 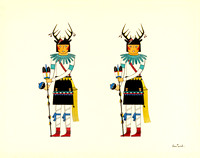 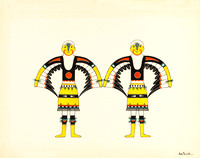