First published on May 1, 1880, the Tombstone Epitaph was founded by John Phlip Clum, a former Indian agent and Tombstone's first mayor. Clum was living in Tucson, Arizona, publishing the Tucson Citizen, when word began to spread about the discovery of silver in Tombstone in the late 1870s. The newspaperman soon decided to start his own paper in Tombstone against the advice of many of his publishing associates. As a lark, Clum named the paper the "Epitaph" to rebuff those associates who had predicted an early demise for the fledgling paper. Boy, were they wrong!

The Epitaph today has been published for more than a century. In its early days, it was noted for its coverage of the Gunfight at the O.K. Corral as well the many other accounts of Tombstone's lawlessness. Today, souvenir copies of the paper accounting the most famous gunfight in history can still be purchased. Vintage photo restored by Kathy Weiser-Alexander.
No EXIF information is available
Categories & Keywords
Category:City Scenes
Subcategory:Buildings
Subcategory Detail:
Keywords:arizona, attraction, buy, camp, commercial, download, editorial, epitaph, ghost town, image, mining, newspaper, old west, photo, picture, print, purchase, stock, tombstone, tourist, vintage
© www.legendsofamerica.com 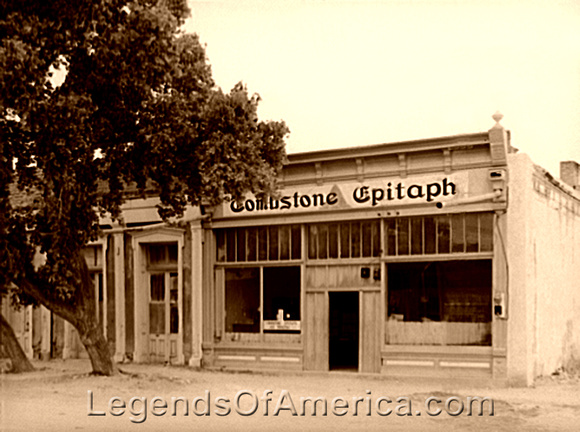