When the white settlers began to populate the area, they recognized that it was an ideal place to Cross Canyon Diablo – first by wagon, then later by motor cars. The town of Canyon Diablo, Arizona originated as a railroad town in 1880 when construction was halted until a bridge could be built over the canyon. A further delay was caused by financial difficulties and it wasn’t until 1890 that the railroad bridge was completed.The canyon had earlier been given its name by a soldier named Lieutenant Amiel Whipple in 1853 when it presented such an obstacle to his thirty-fifth parallel survey party. Having to go miles out of their way to get across, he appropriately named it Devil’s Canyon. When the town was born, it took the canyon's name, which ended up being extremely appropriate for the reputation that the town would soon earn.

There being no law enforcement in the settlement, it quickly became a wild and lawless place as drifters, gamblers, and outlaws made their way to town. With the closest law enforcement being some 100 miles away, the settlement earned a reputation of being meaner than Tombstone and Dodge City combined, with many of it "citizens” winding up in the local cemetery.

Later, when the nearby National Trail highway was re-named Route 66, area residents created the town of Two Guns just to the south to serve travelers, named after a local resident named Henry E. Miller, who called himself "Two Gun Miller."

Reportedly, Miller was an eccentric hermit who lived in a cave in nearby Canyon Diablo and was hostile to visitors. He was also said to be wild and violent. Another report says that he owned the service facilities in the town and that was the reason for using his name.
© www.legendsofamerica.com 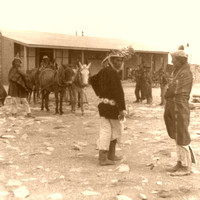 Guestbook for Two Guns
james wymer(non-registered)
a cross country truck driver that fell in love with the area have spent many hrs. in the company of Two Guns and Canyon Diablo City....I have taken many photos of the area.
When I pass I have asked that my ashes be spread in a particular "horseshoe Bend" located in the canyon.
Powered by ZENFOLIO User Agreement
Cancel
Continue