Also called the Llano Estacado or “Staked Plains,” this region sits on a high, flat plateau and is mostly comprised of grasslands. However, the plateau is interrupted by a number of rivers that have carved deep canyons and crevices on the otherwise flat terrain. These include Palo Duro and Caprock Canyons. The region includes the cities of Amarillo, Lubbock, Borger, Dumas, Pampa, and more. Route 66 crosses the Panhandle from Oklahoma to New Mexico.

People have called the Texas Panhandle home from the time of Paleo-Indian hunters of Pleistocene animals, whose presence is verified by their exquisitely knapped Folsom and Clovis projectile points that have been found. When the first Europeans came to the area, led by Francisco Vázquez de Coronado, in 1541, the area was dominated by Apache ancestors that the Spanish called "Querechos".

Apacheans controlled the Panhandle and surrounding territory until after 1700, when the Comanche came to the area, and they, along with their Kiowa allies ran them out. In 1821 the successful Mexican War of Independence opened Santa Fe, New Mexico to legal trade with United States citizens and Americans began to travel through area and eventually to settle the region.
© www.legendsofamerica.com 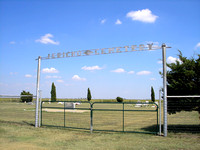