Vintage photos and paintings of pioneers, transportation, explorers, the frontier, and overland trails, including the Santa Fe Trail, the Oregon-California-Mormon Trail. Also includes many current photographs of the many historic places and sites that continue to tell the tale of the mass emigration to the West.

The expansion of the United States into the territory west of the Mississippi River began with the Louisiana Purchase in 1803. President Thomas Jefferson nearly doubled the size of the nation by negotiating a price of $15 million to purchase 828,800 square miles from France, including all or part of 14 current states. In 1804, Jefferson sent an expedition led by Meriwether Lewis and William Clark to explore the area. The three-year expedition produced new understanding of the geography and resources of the western part of the continent.

Prior to that time, European immigrants did not stretch far beyond the eastern seaboard. The first British settlers in the New World stayed near the Atlantic Ocean to be close to their lifeline for needed supplies from England. By the 1630's, however, Massachusetts Bay colonists were pushing into the Connecticut River Valley.
© www.legendsofamerica.com 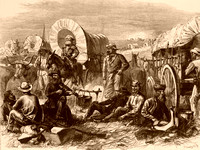