Between the California Gold Rush and the Civil War, Americans, in growing numbers filled the Mississippi River Valley, the southwest territories, and the new states of Kansas and Nebraska. During the war, gold and silver discoveries drew prospectors—and later settlers—into Oregon, Colorado, Nevada, Idaho, and Montana. But, the most rapid migration occurred after the Civil War.

One factor in encouraging settlers to move west was the Homestead Act, passed in 1862, which allowed settlers to claim 160 acres of land for free. Another important factor was completion of the first transcontinental railroad in 1869 which led to much more rapid Western migration.

Westward expansion had serious consequences for Native Americans since continental expansion implicitly meant the occupation and annexation of their lands. The United States continued the European practice of recognizing only limited land rights of indigenous peoples and sought to expand into the west through the nominally legal purchase of Native American land in treaties. In many cases, these treaties were negotiated and signed by tribal members who didn't have the authority to do so, and in some cases, by signers who lacked knowledge of what they were signing. Despite the legality of a treaty, once one was signed, the government often used force to move the Indians from their homelands.
© www.legendsofamerica.com 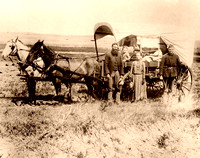 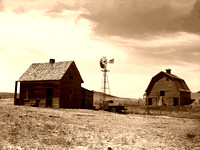 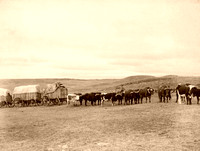 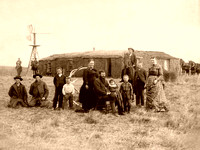 Guestbook for Westward Ho
Wendy Sells(non-registered)
with the pictures of the old west the painters for the builders should have had some colors on the houses. from Wendy Sells
Powered by ZENFOLIO User Agreement
Cancel
Continue